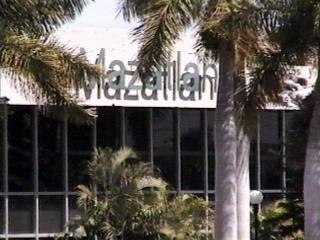 The weather was terrific. Saturday and Sunday, we had outrageous swells rolling through and it was good to be in the Pacific again. Mazatlan is some kind of beautiful--especially at night when you're sitting directly under Orion.

We were among the early arrivals, but more sea turtle people showed up over the next two days. I really enjoyed meeting the Latin-American researchers. I was grateful so many spoke excellent English.

We listened to a lot of presentations but clearly the most satisfying (Peter and I both had smug triumphant grins on our faces) was the talk by Dr. Mellgren on how sea turtles learn. He concluded his presentation with the comment that green sea turtles are "rapid learners"--we knew that all along and it was great that a scientist has now proved it!

Certainly one of the most satisfying things for me was to put faces to CTURTLErs and find that I like them just as much in person as I do in cyberspace. I also want George, J, Brendan, Nicholas, Jack, Paul, Larry, Laura, Sam, David and the TOPSAIL crew to know that they all hug nicely and not to worry, I think I am over the contagious part of my cold!

I was grateful for all I learned at the fibropapilloma workshop and the two veterinary sessions. Best of all, I got to "talk story" with the researchers I admire most.

A few highlights to share... during the banquet I got to sit two seats away from Dr. Ehrhart. The questions I have about FP and the Indian River, and yet I was too shy to utter a single word to him! (Maybe next year...)

The stage dancers at the banquet were somethin' else. The best dancer was this guy who did a traditional slow, rhythmic Mayan dance--graceful with a splendid physique and he shone gold like a Sun God. He danced barefoot.

Oh yeah, the evening before, (the Friday), Peter was asked to chair the video session. Two special memories from that. First, all the flashes going off during the showing of our video ONCE UPON A TURTLE HOUSE. I hope the flashes weren't so strong that they get only a white screen. It was gratifying that people wanted to take pictures of the honu we love so much.

Later on though I witnessed something rather unique. A video called The Art of Bekko was a last-minute addition to the program and we all got to watch it. As a courtesy I stayed in my seat during the showing. The video ended with a Japanese craftsman holding out his completed hawksbill shell comb while the narrator talked about its "exquisite beauty." Then it faded to black.

As chair, Peter went to the podium and I knew something was up (I could tell his scutes were in a knot). Then slowly he said, "Well that certainly was an...ahem...interesting video. I would like to thank the presenters for showing us the exquisite beauty you can get from an endangered species once it has been killed and cut up."

Silence... and then some scattered applause and people started getting up. I walked over to Peter, shook his hand and said, "Congratulations on this your first and last chairmanship duty."

No one came after him with an axe... [Ed. note: quite the contrary, the only comments I received expressed approval--but I'm sure I upset some people.]

I am very worried about the leatherbacks. Next to honu, these are the turtles I would really love to dive with. They are kick-butt extraordinary and they take no prisoners. News of their plight during the resolutions session was another disturbing storm cloud from this Symposium.

Latin Americans are very proud of their sea turtle conservation programmes and when you hear them talk you can see their eyes shine with love for the tortugas. That makes them kin.

The honu we dive with have given us so much. But their greatest gift was channelling us into meeting sea turtle researchers and fellow turtle-laypeople.

Only during the Symposium week are there moments when I'm not aching to be with the honu...when I am perfectly happy to be with human beings instead.

On the flight out from Mazatlan to Houston, the plane was packed with Florida and east coast researchers and enthusiasts. As I was scanning the waiting room, contemplating the precious "cargo" on this plane, a CTURTLE friend noted that if the plane went down it'd wipe out much of the sea turtle research programme for the east coast. (He voiced what I only dared think).

But once that plane took off I just felt privileged. Peter did too. I was flying at 30 000 feet with some of my heroes! So when the captain announced it was okay, I cranked up my CD and this white-knuckle flyer found herself thoroughly enjoying the plane ride!

Hope to see you next year at South Padre Island!

Click on the images on the left for a larger version.