The following wonderful news was posted to the CTURTLE mailing list on April 17 by Juan Carlos Cantu of Greenpeace.

Today the Environment Ministry issued a statement whereby the Sol Melia hotel project in X'cacel, Quintana Roo which was authorized last year has been declared null and void.

The Environment Ministry accepted the several review appeals presented by environmental NGOs and the County of Solidaridad against last year's authorization and annulled the project. The Environment Ministry will open up a public consultation process which will take place during the next four months to take a final decision on the matter.

For all purposes, this is a done deal and the consultation process is just a formality since besides Sol Melia and its PR campaign there is no one in the State of Quintana Roo who favors the project. Even the Commission of Natural Resources and Environment of the Deputy Chamber of Congress has declared itself against the project.

It has taken more than three years of campaigning by local and international ngos as well as many scientists, the Quintana Roo community and a great many concerned individuals since Xcacel was illegally sold in late 1997 by a corrupt Governor (who is still a runaway from justice and is being chased by Interpol) to finally see a very bright light at the end of the tunnel.

The most important nesting beach for green and loggerhead sea turtles in the Yucatan Peninsula will be saved!

This is not over yet, but like we say in Mexico, this rice is cooked!

Congratulations to everyone who participated.

Turtle Trax joins those who have already extened their congratulations. We particularly want to congratulate and thank Mary Louise Whitlow, who has been at the forefront of the battle to save X'cacel since it first began.

The controversy over the sale to developers of important nesting beaches in Mexico continues. A well-respected Mexican newspaper, La Jornada, has published articles investigating the transaction. The Spanish versions of these articles (Curtain of Smoke and Paradise in Danger), can be found at the web pages for La Jornada. We have added English translations of the articles to our page containing detailed information about X'cacel. Incidentally, Melia tore down the turtle camp’s building at X'Cacel the same week these articles were printed, even though it was within the "protected area."

Below is our original article about the problem. 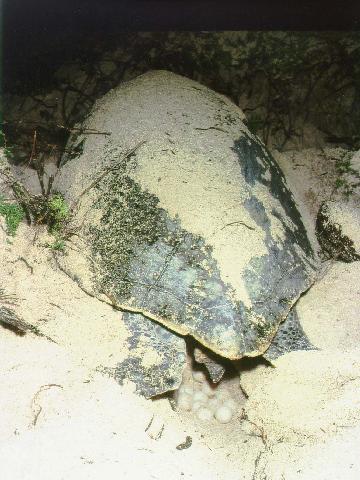 The threat to X'cacel, an important sea turtle nesting beach

On February 1, the government of Quintana Roo, Mexico, sold the important nesting beach at X'cacel to the Spanish development group Melia. Reports say that Melia plans a large hotel project for the area. Construction has already started on the adjoining beaches of Aventuras and Chemuyil, which were sold at the same time.

X'cacel is the most important nesting beach in Mexico for loggerhead and Atlantic green turtles. The $2.25 million (US) sale was completed despite government promises that X'cacel would be kept as a protected area.

The sale triggered an immediate protest from sea turtle biologists and environmentalists, who pointed out that development of the beach posed serious risks to the endangered species in the area, including the green and loggerhead turtles.

Governor Mario Villanueva has since declared the "Santuario de la tortuga marina X'cacel-X'cacelito", which he said would permit strict enforcement of the federal and state environmental law in the area. Villanueva also said he would promote the creation of a fund that would include participation by federal and state governments, NGOs, and local residents. The fund is supposed to support the control and monitoring of the protected area.

Unfortunately, the Governor's actions are not adequate. The decree provides protection only for the area from the 60 meter isobath to 100 meters up the beach. A number of risks still exist, including:

These risks were identified in the Management Plan of the Tourist Corridor Cancun-Tulum (Gob. Fed. 1994a), which was signed by the representatives of conservation groups, sea turtle biologists, and representatives of local, state, and federal Mexican governments. The Management Plan recommends that development should not be allowed between the federal highway and the 60 meters isobath, and if the property is to be sold then the conservation groups who have promoted the protection of the sea turtles and the area should be given the right of first refusal.

More information, and how you can help

Also, please visit Michael Coyne's sea turtle pages and sign on to the letter from the Mexican group "Science in X'cacel":